3.1 company importance in the economic cycle

As seen in the chart we can talk about the CAPITAL CYCLE.

This cycle is similar to that of water in nature, which passes through various states and transformations: it falls on the earth in the form of water or snow, goes to the springs and rivers to the sea, and after evaporating accumulates in clouds that allow restarting the cycle. 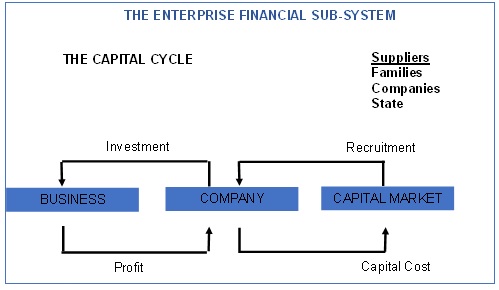 The capital comes from the savings of families, companies and the State. There are families that have an income greater than they need to live, thanks to which they can accumulate a surplus of savings. There are companies that have ordinary income higher than their ordinary expenses: this generates a profit and produces a cash surplus. The State itself may sometimes have a surplus.

These three agents are the bidders in the capital market.

Companies, which raise financial resources on the capital market, invest them in their respective businesses. These businesses must provide a benefit to the companies

Finally, companies remunerate savers-investors with part or all of these profits’ dividends, interest, this remuneration is the COST OF CAPITAL.

In this economic cycle   companies play a major role, like that of the heart in blood flow.  The  heart  takes blood  from  venous tissue, propels it to the lungs for oxygenation, recovers it once oxygenated, and forwards it back to arterial tissue, that is, activates the movement and oxygenates the blood by sending it to the lungs, similarly companies activate the circulation of money between economic agents, and multiply it by investing it in their business.

Two substantial     aspects of this financial cycle should be highlighted:

— EXISTENCE OF SAVINGS, if there are no agents that save, there is no capital cycle, for example, in the Third World countries, of course there are companies, but put with money from developed countries and the benefits go to those countries..

— MULTIPLICATION OF MONEY, this is the role of corporate business, and it is what enables the economic growth of developed countries.

Prospective possible investors, business, and way of remunerating   investors (own or foreign financing) should be cited)

3.2 Company concept as a community of interests

There are three groups in the company whose interests are not always coincident (Owners, Directors, Workers). The company is viable if all three groups achieve satisfactory objectives).

Looking at the above aspect we can understand the company as it is a system composed of three groups: each of which has objectives contrary to those of the other two groups

The paradox will occur when you realize that on many occasions you will have all three roles at once.

If we had to summarize in five words the functions of a manager, either the Director General or another executive would be

Plan means that you must select from the various possible alternatives of:

Organize means to list the activities necessary to carry out the planned by:

ACOPLATE,  Men and media in balance to carry out the action.

DIRECT, in short, is:

The coach must make together with the client a list of the information that he or she believes he or she will need to fulfill the policy function.

This list should now be approximate, and it is recommended that it be reviewed at the end of the module